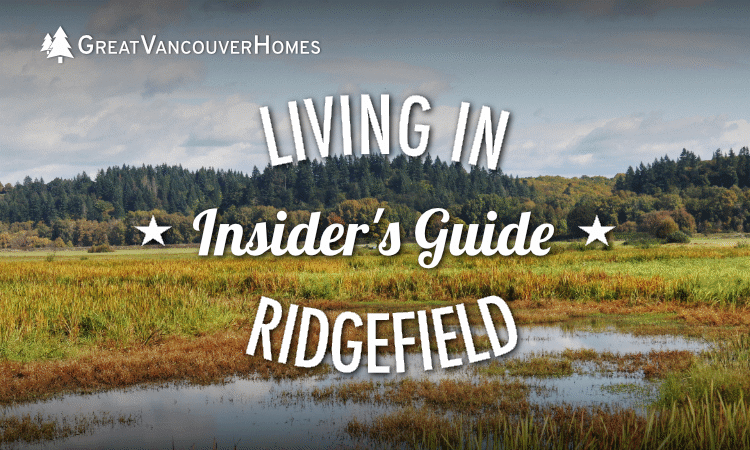 Initially settled by the Chinook Native American people, Ridgefield, Washington is now a rapidly growing town of a little over 9,000 people. Ridgefield's population has more than quadrupled over the last few decades and doubled since 2010. Originally named Union Ridge, the town gained its current name in 1890.

Ridgefield is surrounded by fertile farmland, river tributaries, and forests. Downtown sits on the banks of the Columbia River, which forms the boundary between Washington and Oregon. The Pacific Ocean lies roughly 50 miles to the West. Vancouver, Washington, is just 10 miles south.

The town's Historic Downtown area remains a strong tourist draw with preserved buildings including the post office, community center, and police station. A self-guided walking tour was created for the town's Centennial in 2009. Ridgefield is home to a National Wildlife Refuge, noted for its marsh and grassland habitats, which host large migrating populations of sandhill cranes, shorebirds, and songbirds.

The area was visited twice during the Lewis-Clark expeditions of 1805 and 1806. The explorers were impressed by the Chinook Native Americans' traditional "plank houses" with their cedar wood structure and removable, transportable roofs. Around 14 large plank houses were located in the nearby Chinookan settlement of Cathlapotle. Ridgefield has reconstructed one such house, situated on its wildlife reserve and opened in 2005.

The first European homesteader was Irish immigrant James Carty in 1840, soon joined by his nephew of the same name. The Cartys were followed by William Shobert in 1853, who was keen to source timber from the heavily forested land. Following the Civil War, many Unionists settled their families in the area, drawn by the Lake River's gently sloping banks. Ridgefield was first named Union Ridge.

Ridgefield quickly became an important trading post due to its favorable location on the Columbia River (of which the aforementioned Lake River is a tributary). The city was officially incorporated in 1909. A post office was established in 1865, and electricity reached Ridgefield in 1916.

The U-Haul company originated here in 1945 when L. S. Shoen built the first trailer in a tool shed on the Carty family ranch.

Covering 5,200 acres of marshes, grasslands, and woodlands, the Ridgefield National Wildlife Refuge was established (alongside three other reserves in the Willamette Valley) to provide a wintering stopover for migrating birds whose usual Alaskan nesting sites were destroyed by the 1965 earthquake, particularly Canada Geese.

It sits on the Columbia River floodplain, and the U.S. Fish and Wildlife Service manages several walking trails in the region. The Oaks to Wetland trail begins at the North of Main Street, where it meets NW 291st Street, and is currently a 2.8 mile out and back route to the Lake River overlook, although a five-mile circuit should open soon. A little way along the trail, you can see the Cathapotle Plankhouse, a reconstruction of a traditional Chinook cedar dwelling.

Other local trails include the Carty Trail at the Port of Ridgefield, which leads to the Lake River overlook, and the Kiwa Trail, off the NW Tour Route Road. Constructed of a boardwalk and compacted gravel paths, this latter route is particularly accessible.

Birdlife which can be observed from these trails include Bald Eagles, Canada Geese, Great Blue Herons, Great Egrets, Purple Martins and Tundra Swans. Other animals native to the refuge include coyotes, red foxes, porcupine, mink, river otters, black-tailed deer, and even cougars.

The refuge is by far the biggest draw locally, with visitors coming from all over the Western Washington and Norhtwest Oregon.

From May to October, Ridgefield Farmers Market takes place in Overlook Park on Saturdays between 9 am and 2 pm. Stalls include local produce, seedlings, jewelry, soap, flowers, baked goods, and home décor items.

Live bands entertain the locals shopping for bargains and tasty produce. There are seasonal events such as the Halloween Scavenger Hunt and the Big Paddle, a mass kayaking and canoeing meet.

On the first Saturday of each month, downtown Ridgefield hosts popular events ranging from movie marathons to Spring Festivals to Bluegrass concerts; there's a host of fun things to do and explore. There's a multicultural day celebrating diverse communities, including the town's Native American population, and Make a Difference Day, where you can learn about Ridgefield's non-profit and charitable organizations and activities. Check out the Ridgefield First Saturdays Facebook page for more.

The Pacific Northwest is an important wine-growing region, with winery visits another popular local attraction. The Willamette Valley to the south and Columbia Gorge area, fifty miles to the east, is particularly fertile. Their damper climates produce the most Burgundy-like reds available in the United States.

Closer to home, there are ten boutique growers near Ridgefield. Here are some of the best: 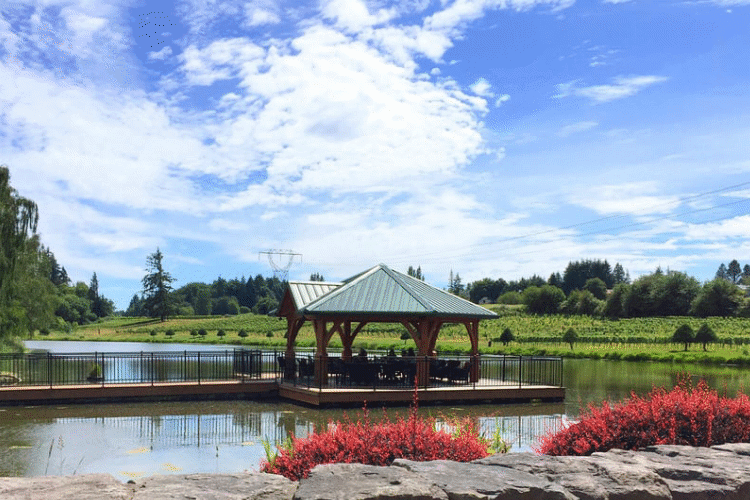 Tri-Mountain is a public course in Ridgefield. It is well-maintained and known for being one of the better values in the Vancouver/Portland area. Golfers enjoy incredible territorial views of the nearby Cascade Range - including scenic views of Mt. hood, Mt. Adams, and Mt. St. Helens - during their play on the course as well as from the restaurant. Players need not worry about forgetting their gear; the clubhouse shop carries a wide selection of equipment and clothing.

The first Clark County Fair was held in 1868 in Esther Short Park (Downtown Vancouver). Over the decades, it was held in several locations until finally settling at Ridgefield's present site in 1955. Each summer, folks from around the region descend up the Clark County Fairgrounds for the annual fair. The amphitheatre host concerts throughout the year and the Event Center at the Fairgrounds put on larger events. Annual events include the Washington State Horse Expo, Greater Clark County Kennel Club All Breed Weekend, Clark County Women's Show, and Vancouver Gun Show, to name just a few.

Owned by the Cowlitz Indian Tribe, ilani opened in the spring of 2017. It is one of the larger casinos in the Pacific Northwest with 100,000 square feet of gaming space. What’s more, the property includes a 30,000 square foot events center and a 2,500-seat entertainment venue. They are open 24 hours a day, 7 days a week.

As well as Overlook Park, which hosts both the Farmers Market and First Saturday events, Ridgefield contains a half dozen city parks, a community park, and a skate park.

Downtown, Davis Park hosts outdoor movie events in the summer and has picnic tables and a children's play area.

Abrams Park is a 40-acre site with facilities for baseball, softball, soccer, and a horseshoe pit, and a disc golf course. You can book its picnic shelter, Bennett Hall for private sports events – it comes with a kitchen, tables, and seating.

If you're looking for a place for a picnic, Eagle Park is situated at the edge of the Nature Refuge and offers quiet and great views.

Finally, the Community Garden offers locals the opportunity to grow vegetables, herbs, and flowers on shared allotments – it's a popular facility for growers of all ages.

The region has a temperate climate, with winter lows around 32°F and summer highs of 79°F on average. It rains a little more than usual, with 47 inches a year compared to the national average of 36. Ridgefield's annual snowfall is only two inches, on average. Winters here are mild. Like most cities in the Pacific Northwest that lie west of the Cascade Mountains, sunshine is also a little less frequent than the national average, with 145 sunny days per year.

The schools are as follows:

There is a very comprehensive online Family Resource Center with a host of supportive services, including emergency hotlines, medical and dental services, and community advice.

Be sure to view all Ridgefield, WA homes for sale. 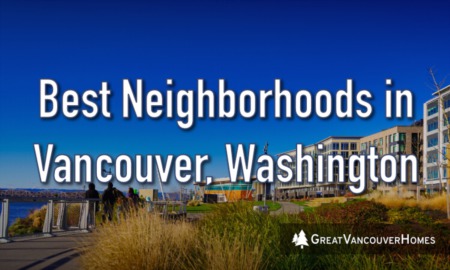 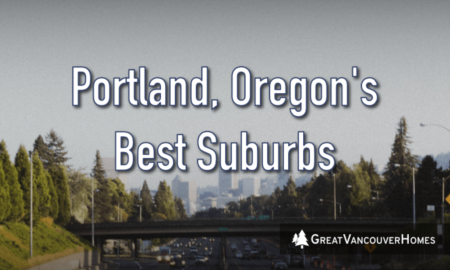 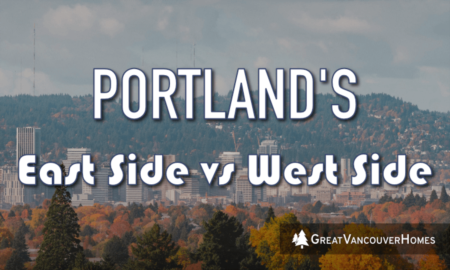